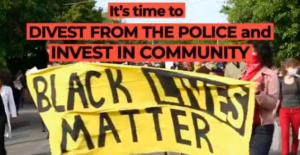 So much happened in 2020 – from the Census to the uprisings for Black lives and against police violence to the historic election. And, of course, all of this occurred during a time dominated by the pandemic and wildfires, both of which really exposed the ravages of capitalism and racism here in Oakland and around the world. Through it all, we pivoted our outreach strategies to make sure we stayed connected to folks in the flatlands, organizing for the political power and services we need.

Highlights from this year include:

We are proud of these successes. And, with the election, we saw that organizing still gets the goods. Oakland voters showed their generosity and deeply-rooted progressive values, voting to strengthen the police commission, give youth the right to vote in school board elections, increase fines on corporations, and support a tax increase to fund homeless services, housing and healthcare. Sadly, on the statewide level, corporate interests prevailed by wide margins. They poured hundreds of millions of dollars into efforts to avoid paying their fair share of taxes, keep gig workers exploited, prevent rent control, and keep certain health clinics unregulated.

This year has been full of challenges and opportunities as we wrestled with how best to ensure that Oakland serves the needs of our communities. Rolling off of the jam-packed, surprise-filled year that 2020 was, we anticipate 2021 starting at a pace that allows space for reflection and planning. This includes a retreat with our partners at which we will 1) continue to strengthen our collaborative partnership and structure, and 2) conduct a strategic power analysis and mapping of Oakland and Alameda County. During the first quarter, we will also land on clear shared policy priorities that will inform our campaigns. Beyond our collaborative, we plan to deepen and expand existing coalition and alliance relationships with organizations as well as elected officials.

We are already clear that shifting funding in the City of Oakland’s budget away from policing and towards areas that will ensure real public safety will be a major priority. This isn’t new territory for us — as a member of the ReFund Oakland Coalition, we have long worked to shift the city’s budgeting priorities to funding to areas that address Oakland’s biggest issues, including housing and homelessness, crumbling streets and too many low-wage jobs. This includes over a decade of working to reallocate funds from police to community services for what we see as “comprehensive community safety”. And more recently, as a founding member of Defund the Police coalition, this summer we successfully achieved the removal of OPD from Oakland public schools and established the Reimagining Public Safety Task Force.

We will also work on the implementation of Oakland’s independent redistricting commission to ensure fair representation. Our work around democratizing redistricting dates back to 2013 when Oakland’s redistricting process started following the 2010 Census. As a founding member of the Oakland Votes coalition, we worked to ensure that all residents of Oakland, and especially those from low-income, immigrant and communities of color, had a say in defining their new district lines. After surveying community members, we developed, qualified and passed a ballot measure in 2014 that would create a 13-person Redistricting Commission in time for the 2020 redistricting process. We look forward to implementing the results of this in the coming months.

Here’s to everyone’s health and safety now and in the new year.