If you walk around Oakland Chinatown you’ll probably see groups of people wearing the same color vest. They’re volunteer foot patrols, several of which have popped up in the last year in response to a spike in crime and violence in the neighborhood.

That spike is part of a larger uptick in crime across the city, but combined with a dramatic rise in anti-Asian violence nationally, it’s driven some residents to avoid running errands in Chinatown.

Fifth & Mission podcast host Cecilia Lei spent several weeks reporting in Oakland Chinatown, talking to residents, merchants and activists about how the neighborhood should respond to the increased violence of the past year.

On the heels of last summer’s protests following the murder of George Floyd, the Defund the Police movement gained influence in Oakland, including in Chinatown.

“As you walk around, you just get a feel for the level of concern and violence. Take a look at all the boarded up businesses here,” says Bob Yee, who’s part of the foot patrol of the East Bay Toishan Association, a fraternal organization for Chinese immigrants based in Oakland Chinatown.

“Police can only do so much. They’re not everywhere. This is where we fulfill the unique role of the community. Right now, it’s one of those things you kind of wished that we didn’t need to do this.”

This spring the Oakland City Council redirected about $18 million from Mayor Libby Schaaf’s proposed two-year police department budget to fund violence prevention measures and social services — though the final budget figure of about $673 million was still a $9 million boost. 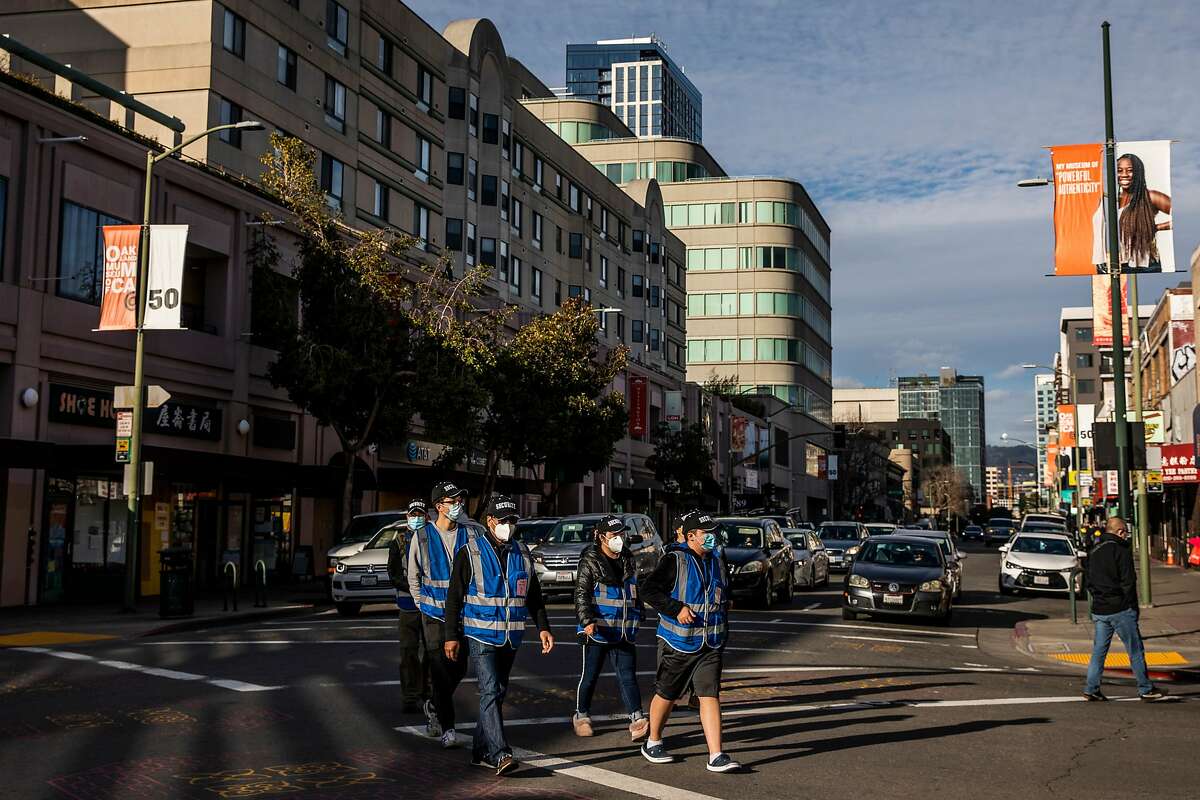 Volunteer safety patrol members in blue vests walk in groups in Oakland Chinatown Feb. 16, 2021. Community members are on heightened alert after the recent increase in violent crimes, many caught on camera, toward the Asian American community throughout the Bay Area. Photos by Stephen Lam / The Chronicle

But cutting back on police is by no means a unanimous sentiment in the neighborhood.

“I don’t know of anybody, at least not in the Chinatown area, that wants to defund the police,” says David Won, another Toishan Foot Patrol member. “I think everyone here, especially, you know, right now, today, is for more police presence.”

Carl Chan, the president of the neighborhood’s Chamber of Commerce,made a public plea to Gov. Gavin Newsom a few days after an August incident in which a man was shot and wounded as he tried to intervene in a strong-arm robbery at Eighth and Franklin streets.

“Governor Newsom, what we want you to do is declare a state of emergency for the city of Oakland,” Chan said at a rally. “We want you to bring in California Highway Patrol.”

The CHP began patrolling Oakland streets Sept. 12. That’s in addition to the increased police presence in Chinatown. Residents have noticed more foot patrols and police SUV’s on almost every block in the neighborhood.

But Oakland resident and community organizer Liz Suk says that presence sends the wrong message about the community’s needs because it “centers the criminal justice system as a legitimate one. And it is not legitimate because it is a system that targets certain people, particularly black and brown folks, communities of color and immigrant folks as criminal.”

Suk says it’s a mistake to frame crime in Oakland Chinatown as exclusively anti-Asian hate because the neighborhood is adjacent to downtown, where there’s a large community of people who have unmet housing and mental health problems.

“If we just said this is Asian hate crimes as it stands, then we’re going to go after what we consider the perpetrators,” she says. “If we don’t give the context — that it is actually an exacerbated mental health issue, it is an exacerbated unhoused issue — if we framed it in that way, then we would address the mental health issue, we would address the housing issue.” 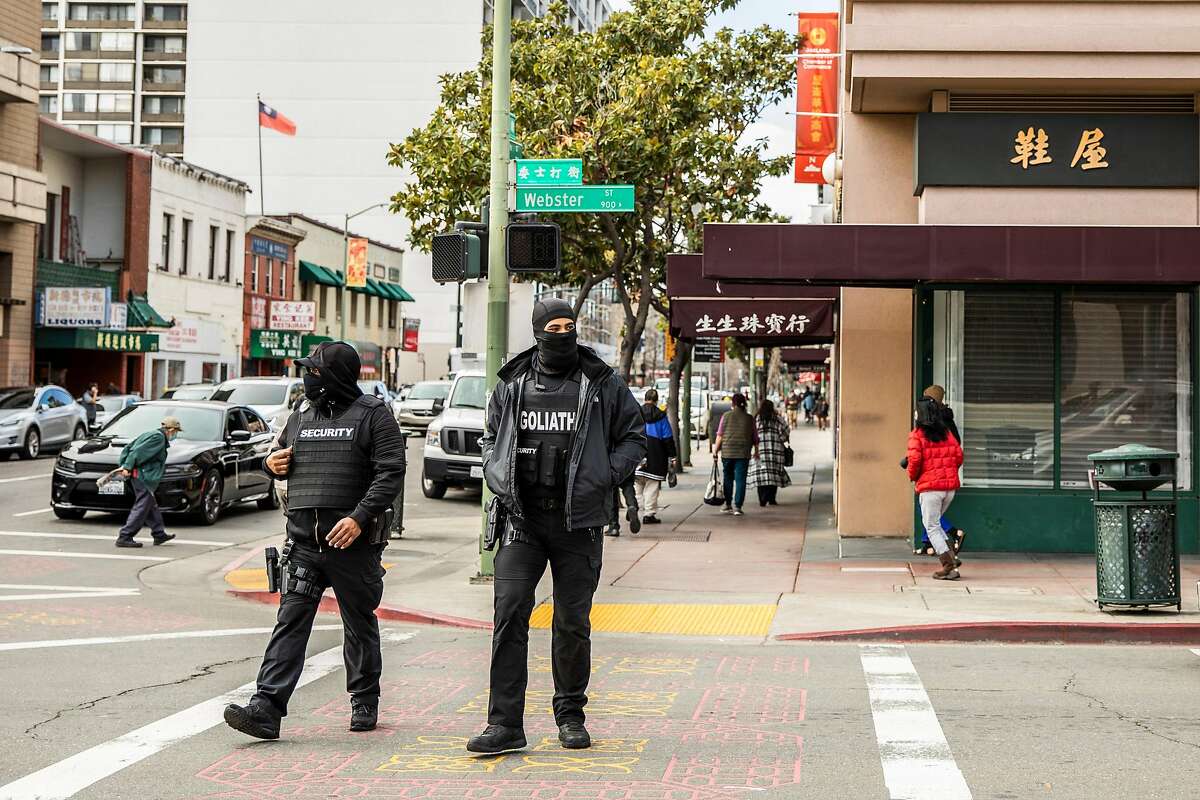 Armed security members from Goliath Protection Group, contracted and funded by a GoFundMe crowdfunding campaign, patrol on Webster Street in the Chinatown district of Oakland.Photos by Stephen Lam / The Chronicle

Mental health and housing is key to understanding the larger public safety needs of Oakland Chinatown, says Sakhone Lasangphangthong, who is the director of housing services for Family Bridges, a social services organization in the neighborhood. He’s also a community ambassador who walks around the neighborhood and helps foster safety by de-escalating violence, cleaning up graffiti and engaging with the unhoused community.

As a former juvenile lifer who served two decades in prison, Lasangphangthong brings his understanding of the criminal justice system to Chinatown, to help bridge some of the existing divisions.

“If we’re not out here helping folks that are in need, then a lot of time when people are desperate, they do things that are desperate,” he said. “That could mean snatching somebody’s purse, stealing or robbing somebody. And that’s something that we want folks to avoid … going to that extreme.”

Lasangphangthong says building a more connected community, one that is proactive in this way, is a much better investment in the well being of the entire neighborhood, rather than relying on external members — like the police — for true public safety.

The CHP began patrolling Oakland streets Sept. 12. That’s in addition to the increased police presence in Chinatown….But Oakland resident and community organizer Liz Suk says that presence sends the wrong message about the community’s needs because it “centers the criminal justice system as a legitimate one. And it is not legitimate because it is a system that targets certain people, particularly black and brown folks, communities of color and immigrant folks as criminal.”