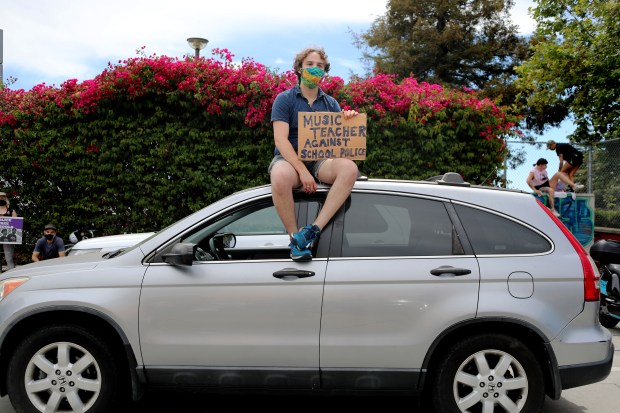 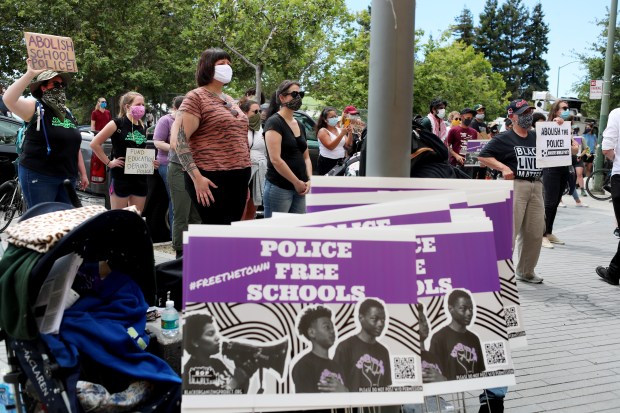 OAKLAND — In response to local outcry spurred by the police killing of George Floyd, the Oakland Unified School District is preparing to boot its police force from all campuses, mirroring similar actions across the country.

But how the district intends to keep its students safe when police are gone is unclear and being discussed.

Superintendent Kyla Johnson-Trammell said at Wednesday night’s school board meeting that a “safety plan” built on the roots of restorative justice will be completed by Dec. 31.

A majority of school board members signaled their support for the “George Floyd Resolution to Eliminate Oakland Schools Police Department,” which could redirect about $2.5 million spent on about 10 sworn officers and police administrators to other student support services and coordinators for restorative justice. The board is expected to vote on the resolution at its June 24 meeting.

School board member Roseann Torres, who co-authored the resolution, said at a press conference earlier in the day that the safety plan could include security cameras and locks on doors.

“We’re not doing this to leave our children to be harmed,” she said.

In a letter to the community presenting her thoughts for a safety plan, Johnson-Trammell said, “Together, we can reimagine how to keep our schools safe, healthy and welcoming in a way that builds on our strong restorative justice roots, strong foundation of community schools and critical partnerships throughout the city to protect our students’ physical and psychological safety.”

Johnson-Trammell said she was directed by the school board in March — before Floyd was killed — to craft an “alternative safety plan” that could be put in place if the board opted to jettison its law enforcement force. Since then, she’s been in conversations with the police chief, whom she said was “in full support” of the plan, and other community leaders. She mentioned that this plan would include negotiations with the district’s labor unions.

But Janell Hampton of the California School Employees Association, which represents Oakland Unified’s sworn police officers, stated they are under contact with the district until June 2022. Hampton said she asked district officials to meet at the table “like a functioning district should.”

Approximately 50 people spoke about the resolution Wednesday, all except one in favor. Some said having police on campus can be traumatizing for students of color, and others urged the board to be “on the right side of history” and reinvest the money into student services such as more libraries, nurses or social workers.

One of the youngest speakers was Xiomara, a third-grader: “I’m tired of black and brown people getting killed by police,” she said. “I don’t need police in my schools.”

Liz Suk, a program director with Oakland Rising, called for immediate action. “We’re here to say we’re not waiting any longer. We urge you to get behind your constituents … the nation is waiting for all of us to reimagine the new world.”

Keith Brown, president of Oakland Education Association, said, “We must eliminate the school-to-prison pipeline. Black lives matter in school. It’s not just a slogan, we must make that a reality.”

The Black Organizing Project, which played a major role in bringing the resolution forward, says Oakland Unified spent $9.3 million on its police department from 2013 to 2018. Black students make up 26% of the student population in the district yet account for 73% of the arrests, according to the organization.

Asked Thursday what would happen if significant trouble erupts at school, district spokesman John Sasaki said administrators would call 911, “as would anyone else, and police would respond, just not our own police.”

Torres agreed, telling this news organization that’s already the case. She noted the school police force is small and had to handle 9,000 calls for service in the last four years.

The safety plan eventually implemented could include mandatory implicit-bias training for teachers, who are typically the ones who call police, she added. Having a mental health coordinator aboard to get to the root of a student’s disruptive behavior would also help, she said.

Oakland Unified is the only district in Alameda County with its own police department, one that has been mired in controversy before.

It was established in 1957 as a security force and later attained police status. It worked closely with city police in the early 1990s, but later in the decade the school district decided to make it more autonomous.

Then in 2001, shortly after signing a contract with its officers, district officials dismantled the department for being too expensive and ineffective. But the Public Employment Relations Board found that school officials should have negotiated with the union. After the state Supreme Court agreed, the district in 2007 was ordered to reinstate the terminated officers.

Last week, the Minneapolis school board voted to end its security contract with the Minneapolis Police Department following the death of Floyd while a white officer pressed his knee into the black man’s neck, the Associated Press reported. The officer, Derek Chauvin, has been charged with second-degree murder, third-degree murder and manslaughter.

Closer to home, the West Contra Costa Unified School District Board of Education on Wednesday voted unanimously to end contracts with police on campus until issues of police brutality and institutionalized racism are “adequately addressed,” according to district spokesman Marcus Walton.